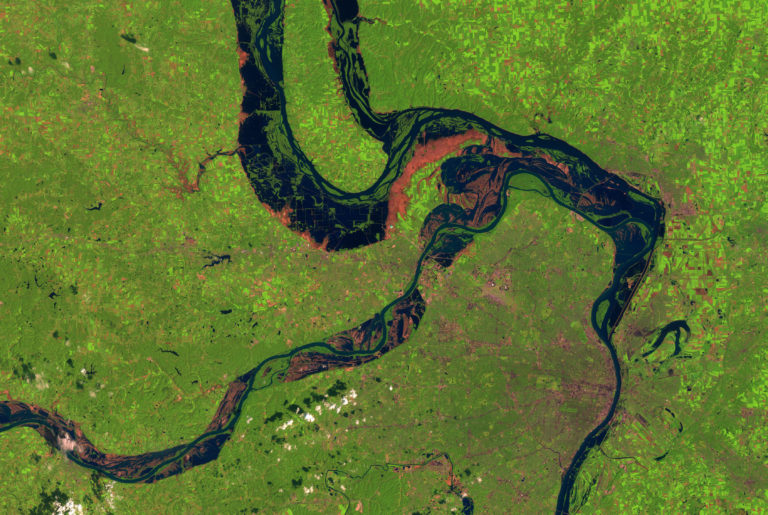 The next time a river overflows its banks, don’t just blame the rain clouds. Earth system scientists from the University of California, Irvine have identified another culprit: leafy plants. This NASA satellite image shows flooding at the confluence of the Illinois, Missouri and Mississippi rivers near St. Louis on Aug. 19, 1993. In a new study, Earth system scientists from UCI stress that the role of plant physiology in future river flooding will be as significant as that of climate warming. (Image: NASA, found on news.uci.edu)   In a study published in Nature Climate Change , the UCI researchers describe the emerging role of ecophysiology in riparian flooding. As an adaptation to an overabundance of carbon dioxide in the atmosphere, trees, plants and grasses constrict their stomatal pores to regulate the amount of the gas they consume, a mechanism that limits the release of water from leaves through evaporation. “Plants get more water-efficient and leak less underground soil moisture out through their pores in a carbon-rich atmosphere,” said study co-author Mike Pritchard, UCI assistant professor of Earth system science. “Add this up over billions of leaves in very sunlit, leafy places, especially the tropics, and it means there is a bunch more soil moisture stored up underground, so much so that climate models predict rainfall events will saturate the ground and more rain will run off into rivers.” Pritchard said this so-called forest effect dominates atmospheric responses to CO2 on most landmasses up to 30 degrees north and south of the equator, which is where most people live. And he noted that this plant-based phenomenon could have a large influence on flooding in the Mississippi River basin. “I was really interested in the Mississippi because it’s in our own national backyard,” Pritchard said. “It’s a big, complex basin fed by multiple sources, but it kind of looked like the spring rains on the East Coast and the Appalachians were running off more efficiently due to these effects of plant physiology, leading to an earlier peak flow out of the Mississippi than normal, which actually makes sense. The spring rains are able to more easily runoff.” He said the twin effects of plant physiology in the U.S. Southeast and precipitation anomalies caused by atmospheric warming farther north in the Mississippi basin “are both really conspiring to juice up the future flood statistics in equal proportion.” Lead author Megan Fowler , a former UCI graduate student in Earth system science, said that “for this study, we looked at how climate change will affect future river flows worldwide and found that instead of the usual suspects in the water cycle – changing regional rainfall from global warming or other impacts of more CO2 in the atmosphere – it’s actually how low-latitude vegetation physiology reacts to increased carbon in the air that plays an outsized role in river dynamics.” Since earning a Ph.D. at UCI earlier this year, Fowler has become a postdoctoral associate at the Cooperative Institute for Research in Environmental Sciences in Boulder, Colorado. The team used widely available tools to draw their conclusions: a hydrodynamic model to provide granular river flow data and the world’s most popular Earth system model, developed by researchers at the U.S. National Center for Atmospheric Research and the U.S. Department of Energy. “Neither of these are unusual tools,” Pritchard said. “They just happen to have not been linked in this way before.” One uncommon approach of the study was the isolation of plant physiology effects from those of temperature. The scientists ran experiments in which they ramped up CO2 on the leaves and conducted others in which they added the gas to the atmosphere to make warming happen. Then they did both in tandem to try to determine the factors’ relative contributions to the results. “These are the hand-of-god-type experiments that are the whole point of having climate models,” Pritchard said. “In nature, there’s no way to separate the effects of temperature and leaf physiology with heightened CO2 in the atmosphere, but we can do that quite successfully with our models.” Well known in the climate research community for his work on the physics of clouds, turbulence and rainfall, he noted: “But now I’m realizing that addressing uncertainties like the actual magnitude of the stomatal effect in tropical ecosystems – where field experiment data is sparse – may be just as important. This is probably behind in terms of scrutiny compared to issues with clouds and rainfall that are better constrained by satellite data. Maybe it’s time to bring it down to Earth.” Reference: Megan D. Fowler, Gabriel J. Kooperman, James T. Randerson, Michael S. Pritchard, "The effect of plant physiological responses to rising CO2 on global streamflow", Nature Climate Change, October 2019, DOI: 10.1038/s41558-019-0602-x Collaborating closely with Pritchard and Fowler on the project were James Randerson, UCI Chancellor’s Professor and Ralph J. and Carol M. Cicerone Chair in Earth System Science; and Gabriel Kooperman, assistant professor of geography at the University of Georgia and a former UCI postdoctoral scholar who worked with Randerson and Pritchard. Funding for the study was provided by the U.S. Department of Energy, the National Science Foundation, NASA, and the Gordon and Betty Moore Foundation. Source: University of California, Irvine