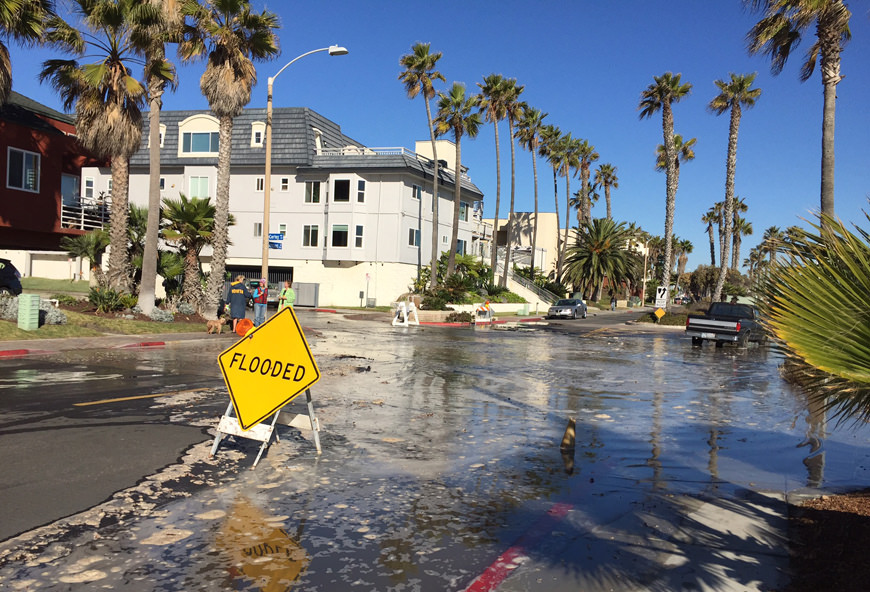 Gift from the David C. Copley Foundation funds Scripps Institution of Oceanography pilot observation system to support vulnerable coastal communities with adapting to climate change. By Lauren Fimbres Wood, Scripps News Flooding at Cortez Avenue and Seacoast Drive during an El Niño event on Dec.12, 2015. Photo: Chris Helmer, City of IB (Image Source: Scripps News) The City of Imperial Beach is a low-lying coastal community south of San Diego that is one of the most vulnerable in California to sea-level rise. During periods of extreme high tides and winter swell, Imperial Beach experiences flooding that impacts residents, businesses and infrastructure. Now, thanks to a $250,000 donation from the David C. Copley Foundation, Scripps Institution of Oceanography at the University of California San Diego will help Imperial Beach significantly upgrade its flood alert capabilities and better prepare for sea-level rise. The Resilient Futures program will create a flood alert system customized to the specific needs of Imperial Beach. A network of instruments to measure local wave and water level conditions is being installed by researchers with the Center for Climate Change Impacts and Adaptation (CCCIA) at Scripps. These observations will improve predictive models of coastal flooding, especially where large waves and extreme tides may occur simultaneously, exacerbating flooding risk. Additional measurements will also be made to monitor flooding on shorelines adjacent to South San Diego Bay and the Tijuana Estuary. “This program will help Imperial Beach to understand what factors are contributing to flood events and inform preparedness for emergency managers and the community at large,” said Mark Merrifield, director of the CCCIA at Scripps and a leading sea-level rise expert. “These tools will also help assess future flooding risk as sea levels continue to rise.” The initial funding from the David C. Copley Foundation has supported the installation by the Coastal Data Information Program (CDIP) of an offshore wave buoy at Imperial Beach to measure wave height, period and direction. Other network components include a tide gauge at the end of the Imperial Beach Pier for accurate tidal heights and water levels; current meters and pressure sensors at 10 meters (32 feet) depth to assess nearshore wave model predictions; and pressure sensors buried in the beach at the mean high water line to test wave run-up predictions in flood-prone areas. Scripps also plans to install an array of pressure and salinity sensors on land to assess the duration, depth and arrival times of flood waters. “Recognizing Imperial Beach is a community at high risk to the impacts from sea-level rise, the David C. Copley Foundation Board of Directors is pleased to collaborate in a partnership with Scripps and the City of Imperial Beach on this important program,” said Dean Dwyer, president and CEO of the David C. Copley Foundation. “We see this as a model that other communities in San Diego and along our California coast could adapt in the future.” The funding also contributes to coastal modeling advancements that will be used to refine the flood forecasting system. “We hope to provide today’s coastal communities with better tools to track extreme events and predict risks,” said Merrifield. In 2016, Imperial Beach conducted a Sea-Level Rise Assessment to identify vulnerabilities and identify adaptation strategies. The study stated that Imperial Beach is particularly susceptible to flooding as it is bound on three sides by bodies of water – San Diego Bay and Otay River to the north, Pacific Ocean to the west, and Tijuana River and Estuary to the south. The study reviewed modeling done by the Department of Defense and U.S. Geological Survey and found that storm-induced dune erosion, coastal flooding from wave run-up, and tidal inundation were the biggest potential hazards threatening wastewater systems, pump stations, roads and oceanfront properties. “It is an honor for the City of Imperial Beach to partner with Scripps Institution of Oceanography to be the first city in California to install sea-level rise monitoring technology along our beautiful beach as part of our efforts to monitor and adapt to rising seas,” said Mayor of Imperial Beach Serge Dedina. Imperial Beach is also a member city of the Port of San Diego, which earlier this year announced that it would coordinate with the U.S. Navy to prepare for potential impacts of sea-level rise. “We recognize that climate change is real and will impact the world around us in tangible ways, including sea-level rise. We all need to plan for it and be a part of the solution, and I applaud this partnership between the City of Imperial Beach and Scripps to upgrade flood alert capabilities,” said Port of San Diego Chairman Rafael Castellanos. “The Port of San Diego is taking a comprehensive approach to evaluating the potential impacts of sea level rise along our bay’s waterfront. A cooperative approach to sea-level rise will ensure that San Diego Bay remains a vibrant resource and contributes to a remarkable way of life for residents and visitors for generations to come.” The gift also contributes to the Campaign for UC San Diego, the university’s $2 billion comprehensive fundraising effort to empower the next generation of innovators to blaze a new path toward revolutionary ideas, unexpected answers, life-saving discoveries, and planet-changing impact. Source: Scripps Institute of Oceanography