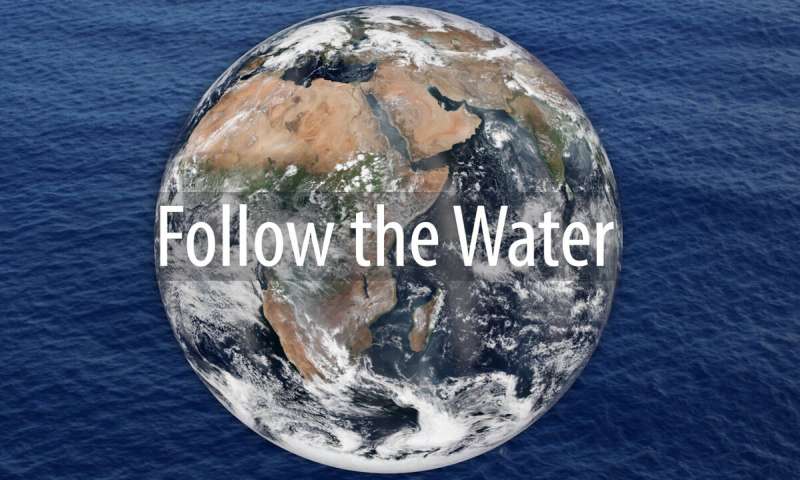 NASA satellites are a prominent tool for accounting for water, as it constantly cycles from water vapor to rain and snow falling onto soils, and across and beneath the landscape. As Earth’s atmosphere warms due to greenhouse gases and the satellite data record continues to get longer and more detailed, scientists are studying how climate change is affecting the distribution of water. Follow the Freshwater: By predicting droughts and floods and tracking blooms of algae, NASA’s view of freshwater around the globe helps people manage their water. Credits: NASA/Katy MersmannTrends are beginning to emerge, especially at the extremes in the frequency and magnitude of floods and droughts. These trends affect everything from local weather to where crops can grow, and have consequences that will ripple through communities today and in the coming century. When thinking about changes to the distribution of water around the planet, it's not just knowing where it rains or doesn't, but also how much, and how frequently heavy rain falls versus light rain. Rainfall amount impacts soils saturation and how high streams and rivers rise, which then changes their capacity to hold more in the event of another storm. Lack of rain stresses vegetation and supplemental water reserves, and when their frequency increases, those reserves are less likely to recover before the next dry spell. NASA satellite data and ground measurements support research into long-term changes to water distribution. One of those efforts is the U.S. National Climate Assessment, which studies climate change and its potential impacts in each region of the country. Among those changes, for example, is an observed increase in very heavy precipitation events across the United States. From 1958 to 2016 heavy rainfall events have increased in the northeastern states by 55%, midwestern states by 42%, and southeastern states by 27%. The western states have also seen modest increases in heavy rain events that can overwhelm the local watershed's capacity to absorb excessive water. "When you think about changing the distribution of precipitation, then you start to think that if you're getting more heavy precipitation, that might mean more flooding,” said Christa Peters-Lidard a hydrologist and Deputy Director for Hydrology, Biospheres, and Geophysics at NASA's Goddard Space Flight Center in Greenbelt, Maryland. "If we’re going to see more heavy rainfall events and we’re going to see them especially in areas that are not designed for those floods, that means that we need to think about how to adapt our infrastructure and rethink the way we’ve designed some of our bridges and drainage systems." Peters-Lidard is no stranger to the realities of what changing patterns of heavy rainfall can do to communities built under different conditions. In the last five years, her home town of Ellicott City, Maryland, has seen two 1,000-year floods that destroyed businesses and homes. "It's been a devastating impact on the community," she said. In response to the floods and likelihood of more minor flooding events, "we're rethinking Main Street and where we should rebuild and where we should not." Find more about this project on NASA