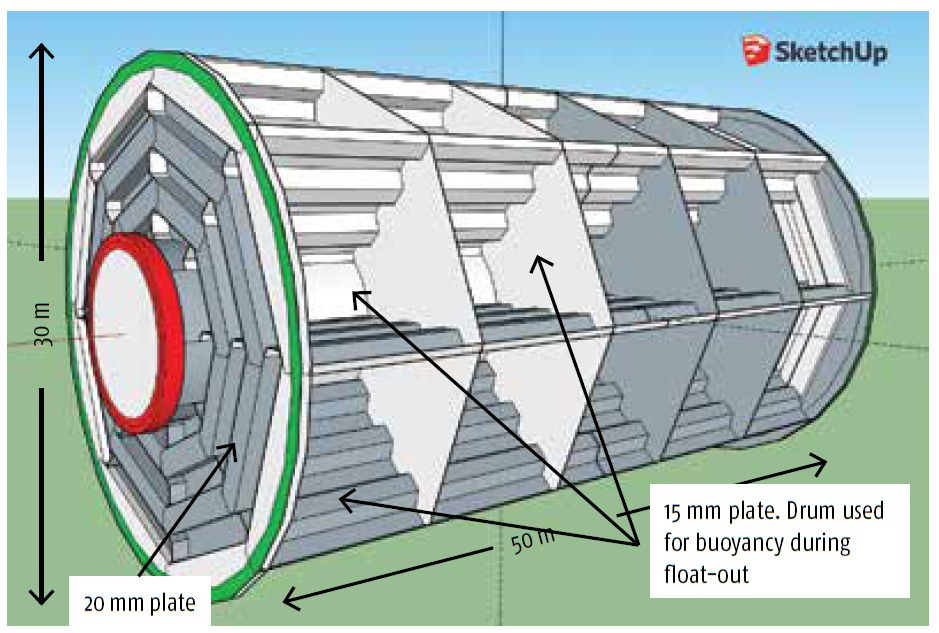 Construction of a water wheel barrage to manage tidal flow and flood water on the River Severn has been put forward to resolve ongoing flooding issues in towns like Tewkesbury, Upton on Severn and Bewdley. The proposal involves building a 800m long barrage across the Severn at Sharpness – the ideal location, according to the project’s inventors – to prevent tidal flow upstream in a bid to allow flood water time to dissipate. The concept is the brainchild of former Atkins head of technology for floating structures Rod Rainey and Severn River flood expert Simon Hopkins who say using the barrage to generate electricity could make it self-funding. “The End to Higher Flooding scheme is a modern version of a water wheel which can be used to generate electricity and pump flood water away,” said Hopkins. “On the River Severn the tide pushes water upstream which does not have time to return before the next incoming tide. This is repeated with rising tide cycles and prevents floodwater from dissipating. “The is a 38km long channel in the river between Gloucester and Sharpness, so what if that area, which covers 26km2 was empty of water ahead of a flood event? Our analysis shows that that capacity would allow flood flows to dissipate three times faster and would break the cycle of economic damage from flooding upstream.” The steel water wheels would be 30 to 50m in diameter and be built in 50m sections on land that would then be floated out into position and rock anchored into place. The wheels would rotate slowly – 1 revolution per second – which Hopkins says would be slow enough for fish to pass unhindered. “The sections could be taken out and floated to land for maintenance,” he explains. “The design uses 30% less steel than conventional water wheels and no concrete, which make it an environmentally sound solution.”   The 50m wide wheels would be floated out into position and rock anchored in place Hopkins estimates that the project would cost £100M to £200M to build and using the wheels to generate electricity when pumping out floodwater means that it could pay for itself in three to five years. He estimates that the project could be built within a year. “We believe that the barrage would need to pump out flood water for 36 days a year,” said Hopkins. “Currently flooding issues affect towns upstream for up to six months because the water simply can’t get away.” 28 MAY, 2020 BY CLAIRE SMITHSOURCE