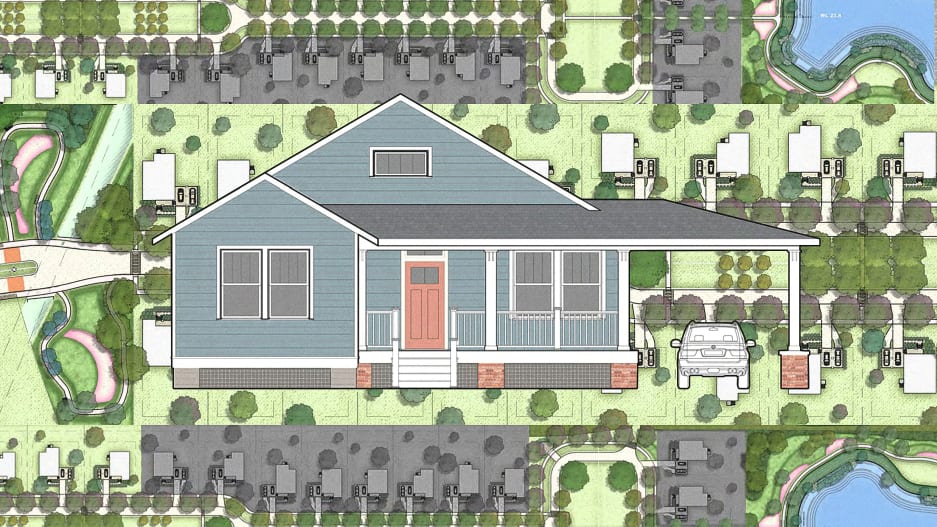 As climate change makes some places unlivable, how can we help the people who live there? In a Louisiana neighborhood that residents call Flood City, homes have flooded 17 times over the last 30 years. Officially named Pecan Acres, the majority Black subdivision in New Roads, Louisiana—a city of 4,000 outside of Baton Rouge—was built in the 1970s on low-lying swampland, with the houses sold to buyers who moved from sharecropping land. Most of the residents can’t afford flood insurance. They also can’t afford to move and lose money on homes that no one else wants to buy. But in a government-funded program, the entire neighborhood will be relocated to a new development now under construction nearby on higher ground. The old neighborhood will become a restored wetland. “What we’re going to do is get these folks moved to a new, safer place where they can have that opportunity to build their family’s wealth that they were robbed of when they bought into this neighborhood,” says Pat Forbes, executive director of the disaster recovery unit at the Louisiana Office of Community Development. The agency is using a combination of disaster recovery funding and funding from a USDA program that supports wetland restoration.   [Image: Louisiana Office of Community Development] It’s one example of a type of program that might become more common. As climate change makes storms more powerful so they dump more rain—such as the estimated 33 trillion gallons of water that fell in the U.S. during Hurricane Harvey in 2017—flooding is getting worse (though Pecan Acres did not flood during Hurricane Laura). Communities near coasts simultaneously have to deal with storm surges or regular flooding from high tides. One 2018 report from the Union of Concerned Scientists estimated that more than 300,000 homes in the lower 48 states are at risk of repeated, chronic flooding in the next 30 years; by the end of the century, as many as 2.4 million homes could be at risk. Right now, the type of mass relocation that’s happening in Pecan Acres is unusual. “Funding for projects that move many households all at once is very rare,” says Anna Weber, a policy analyst at the environmental nonprofit NRDC. “It’s not the norm for these kinds of projects. But it seems to be something that people are talking more and more about, and taking more seriously as a potential option, as we see increased risk from all sorts of natural hazards.” The current system is flawed. Homeowners that have protection through the national flood insurance program often end up repairing their home only to face more floods. For the insurance program, it’s financially unsustainable; as one example among many, after Harvey, the government had spent more than $1.8 million on insurance payouts for a Texas house that had flooded 22 times over 38 years. (The house was worth far less money.) “If you flooded once you’re likely to flood again and again and again,” says Weber. “And just bringing yourself back to where you were before doesn’t address the underlying problem.” In some areas, it may be possible to make larger-scale changes to help, such as upgrading stormwater systems to deal with more rain or restoring wetlands that can absorb water. Houses can also be elevated. But in other locations, continued flooding may be unavoidable. The government is increasing efforts to buy out houses that repeatedly flood so the land can be left as open space. But it’s a slow process, with little support for homeowners. “The assistance doesn’t extend to helping them find a new home, or, you know, making sure that they can relocate to an area where they’re close to their jobs and their friends and their childcare,” she says. Though the money comes from the federal government, the programs are managed by local agencies; those with fewer resources, which most need the help, are less likely to participate. The total amount of funding available also doesn’t cover the need, with the program oversubscribed each year. SOURCE FAST COMPANY