Sharing the Lessons Learned During the 2013 Colorado Flood 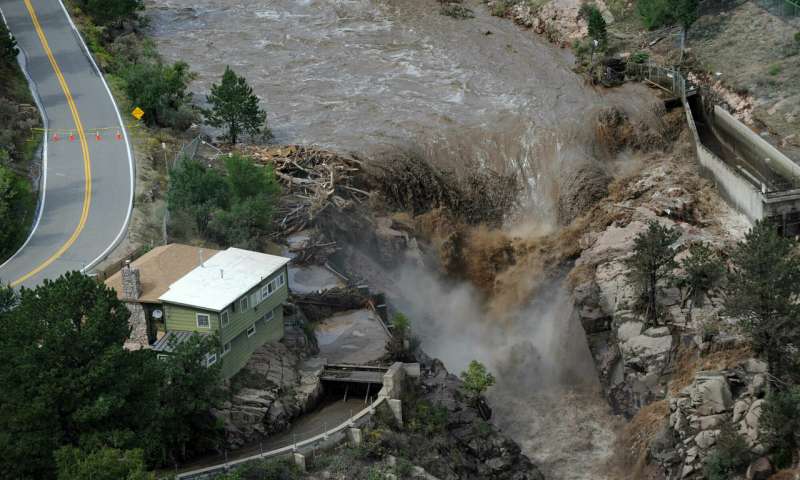 This insightful article by Colorado State University's  Ph.D. Nicole Archambeau looks back at the events from 2013 when a major water crisis hit Northern Colorado’s Front Range. The Big Thompson River thunders through the east edge of the Big Thompson Canyon creating a large waterfall Friday September 13, 2013.The flood damaged sections of Highway 34, at the left (Image source: CSU)Hurricanes and tropical storms on the coasts tend to get countrywide airtime for their intensity and impact, but floods in the central part of the U.S. also cause significant damage and disruption. That is certainly true for the Front Range of Colorado. In 1864, a massive flood from the Poudre River destroyed the Camp Collins military post in LaPorte. In 1997, the Spring Creek flood caused $200M in damages and five deaths, when 10-14 inches of rain fell in a 31-hour period. Most recently, in September 2013, six days of historic levels of rain caused massive flooding in Northern Colorado’s Front Range. “Floodwater damaged and destroyed homes and businesses, mountain towns and transportation networks, ditches, dams and bridges, oil and gas drilling sites, farmland, and natural areas across seventeen counties. Eight people lost their lives. This was a hydro-geologic event, as heavy monsoonal rainfall over many days produced both devastating floods and perilous landslides. State and local officials have estimated the monetary cost of the flood to be over two billion dollars,” notes Dr. Ruth Alexander, a professor in the history department and faculty researcher in the Public Lands History Center at CSU. What can a historian do in response to life-threatening flooding? Quite a lot it turns out. By documenting the communication, cooperation, and activity of natural disaster responders, historians capture the knowledge and information-sharing process that is so crucial to future response and recovery. Less than a month after the flood, Alexander and Patricia Rettig, head of the Water Resources Archive at CSU, had a conference call with Kevin Houck, section chief of Watershed and Flood Protection at the Colorado Water Conservation Board, to discuss the goals and funding for a public history project. Houck expressed keen interest in capturing the insights of professionals in water management, search and rescue, and recovery while the experience was still fresh in their minds. Alexander’s role would be to gather oral histories, recordings, and transcripts of extended interviews of people involved in an event. While the flood prompted oral history projects in numerous counties, the oral history project led by Alexander and funded by the CWCB was the only one focused on emergency responders, water professionals, and officials responsible for flood management. She wanted to explore how and why the flood affected counties and communities in different ways, and how officials and professionals at all levels of government and in the private sector coped in the short and long term. While Alexander originally thought of this project as a resource for government officials and professionals in all areas of water and flood management, she also saw the materials as a resource for scholars, students, and researchers across the university. By making all of the materials publicly available through the Water Resources Archive at CSU's Morgan Library, the project would also be a resource for the citizens of Colorado to learn about "the choices communities can make to lessen their vulnerability to flooding," Alexander says.  People need to be able to find, read, and use historical materials to keep their communities safe because “People are going to die if there is not good communication between professionals and the public,” Alexander says. Read the full story - and lessons learned - on Colorado State Uni's Liberal Arts Magazine