Scientists Aim to Use Crowdsourced Data to Improve Flood Predictions 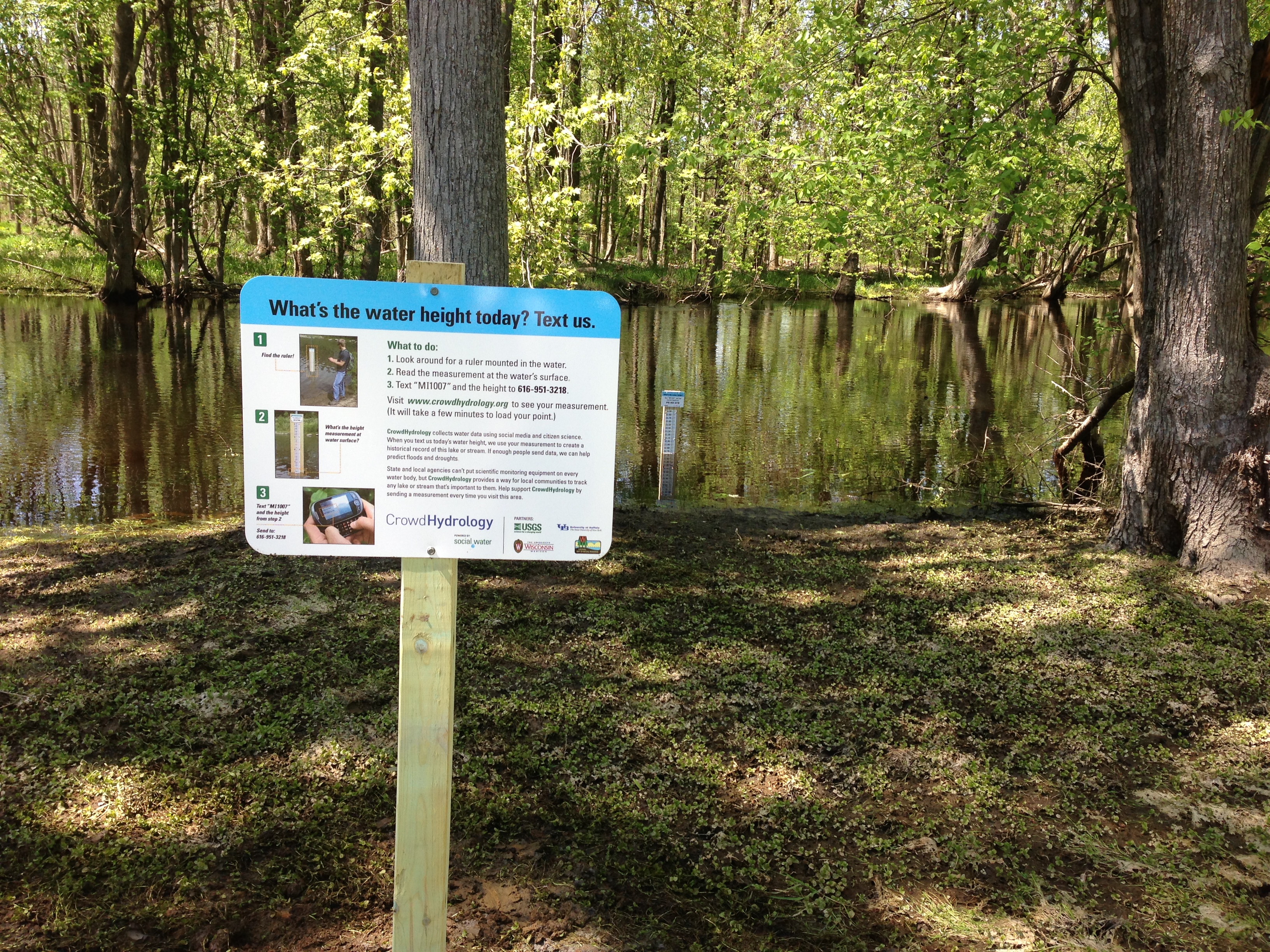 With new NSF funding, researchers will work to integrate citizen science data into the National Water Model By Charlotte Hsu In spring of 2011, University at Buffalo hydrogeologist Chris Lowry hammered a giant measuring staff into the bottom of a pond in Western New York. Nearby, he posted instructions explaining how passersby could read the staff and text him the water level. With these humble beginnings, CrowdHydrology was launched. A CrowdHydrology site in Michigan. Stations include a giant measuring staff and a  sign explaining how passersby can contribute to the project by texting water levels to scientists. Credit: CrowdHydrology The initiative has since expanded to streams into 14 states, and Lowry is now looking to use it to improve predictions of flooding in the United States. With new funding from the National Science Foundation (NSF), he is working to integrate crowdsourced data from CrowdHydrology into the National Water Model, a tool developed by the National Oceanic and Atmospheric Administration (NOAA) to forecast conditions along the country’s waterways. “Not many people know this but there is a National Water Model that simulates and forecasts stream flow in every stream in the continental U.S.,” says Lowry, PhD, an associate professor of geology in the UB College of Arts and Sciences. “I spent the summer down in Alabama working with scientists at NOAA’s National Water Center to look at ways we could use citizen science data to help improve the model.” The NSF award will allow him to continue that work, he says, “with the hopes that we can develop new quality control and data assimilation methods to improve predictions of stream flow, drought and flooding.” Using modern technologies to monitor, forecast floods Lowry’s research with the National Water Model is part of a larger, multi-institution project led by Arizona State University (ASU) that received a $1.5 million Smart and Connected Communities grant from the NSF to improve forecasting and monitoring of floods by harvesting data from sources such as social media, traffic cameras and webcams. The goal is to connect first responders, citizens and other stakeholders with accurate, near real-time data, and to enhance communication about flooding during emergencies. The project will be led by Mikhail Chester, PhD, associate professor in the ASU School of Sustainable Engineering and the Built Environment, and director of ASU’s Metis Center for Infrastructure and Sustainable Engineering. The cross-disciplinary research team includes engineers, hydrologists and computer scientists from ASU, Northern Arizona University, the University of Arizona, Michigan Technological University and UB. Lowry will receive $90,000 of the $1.5 million grant, with UB’s work focused on integrating crowdsourced data from CrowdHydrology into the National Water Model. The evolution of CrowdHydrology CrowdHydrology has come a long way since 2011, when Lowry started it with Michael Fienen, PhD, a research hydrologist at the U.S. Geological Survey Wisconsin Water Science Center. From one pilot station at the Beaver Meadow Audubon Center, a nature preserve in Wyoming County, New York, the initiative has grown to include dozens of locations across the Great Lakes region, with additional sites as far away as Alabama, Utah and California. “We are now in our eighth year of running the network, and early on, many scientists told us they thought citizen science data is of low quality,” Lowry says. “We have worked hard to show the science community that these data are not only accurate but useful. It is wonderful to see CrowdHydrology being used in this big multi-institutional research project.” “This is the second big NSF-funded project that has a component of transformative research revolving around CrowdHydrology,” he adds. “This is, in large part, thanks to all of the people who took the time to send in observations of water levels. We just broke the 8,000-user mark earlier this year. Some of our best CrowdHydrology gages get over 300 observations a year. Without these engaged citizen scientists, none of this would be possible.” Source: University at Buffalo Find out more: CrowdHydrology