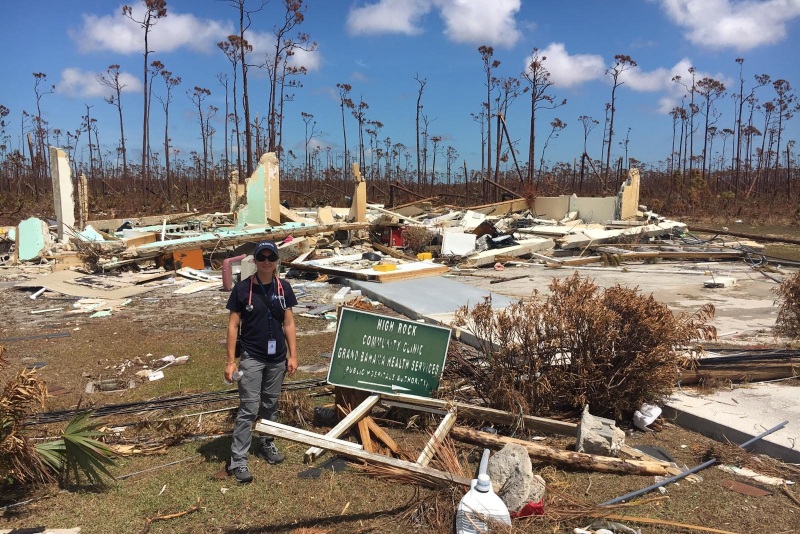 In major storms such as Hurricane Dorian, which initially posed grave threats to the southeastern United States before devastating the Bahamas, massive flooding can occur within a matter of hours.  UConn's Dr. Natalie Moore in the Bahamas at the site where a hospital stood before Hurricane Dorian. Moore and Amannda Ramsdell from the UConn Health Emergency Department are working with the International Medical Corps, which is establishing a tent hospital to care for patients on Grand Bahama Island. (Image Source: UConn Today) But it can take days or even weeks for a flood to recede. And a full assessment of where the damage is worst can take even longer if surveyors can’t access the flooded areas. Researchers at the University of Connecticut are developing a radar satellite-based mapping technique that they say dramatically reduces the time it takes to delineate the flooded areas  — not only enabling first responders to be much quicker and more effective but improving the ability of forecasters to more accurately predict the inundated area caused by future storms.  “When a satellite passes over, we’re able to very quickly quantify the impact and say what is the extent of the damage,” says Emmanouil Anagnostou, professor of civil and environmental engineering and director of the Eversource Energy Center, which is spearheading the project.  “This satellite-based method gives a very good first assessment of where the water is inundating. That’s a very important map because emergency response people can take the map, overlay it on their infrastructure map, and then they can start making quick assessments of the damage.”  According to news reports, Hurricane Dorian killed at least 50 and left an estimated 70,000 people homeless in the Bahamas, and cut power to hundreds of thousands of homes and businesses in Canada. Dorian reached Juno Beach, Florida, on Sept. 2, and moved up the coast from there, causing damage in the Carolinas, as well. Multiple people died in Florida and in North Carolina while working on properties in preparation for the storm. Such threats make a quick assessment of all the more important. UConn’s flood mapping system is automated and “requires zero human interpretation, from the detection of potentially flooded area to the final generation of the flood maps,” says Xinyi Shen, an assistant research professor of civil and environmental engineering. “For the decision-makers and the first responders, it’s very important to know where the flooding is severe so that they can allocate resources.”  Visiting doctoral student Qing Yang from Guang Xi University is collaborating with the UConn team on the processing chain of the flood mapping system. Currently, it takes approximately two days to obtain the data from the European Space Agency’s satellite after a storm and then another 12 hours to generate maps. As UConn began generating flood maps in the aftermath of Hurricane Florence in 2018, NASA also adopted the maps. While that might not sound fast, it’s a big improvement over what is currently available. “Even with a two-day delay, there’s no team globally that produces [inundation maps] in such a short time-frame,” Shen says.  Anagnostou says, “very few people know the extent of any damage from utilities to flooding. The true assessment of the damage comes weeks or even months after the event,” usually with surveys and drones.  “I know that everybody is always focusing on forecasting, and there is a lot of effort going into the forecasting, but very few people can give in almost real-time a true estimate of what actually happened after the storm passes,” he says. “There’s no access to those locations to be able to go and survey them, so a space-based system is the only source that emergency managers have to understand the extent of the inundation, which results in the extent of possible damages.” The research team first reported on the use of satellites to produce inundation maps in near-real-time in the February 2019 edition of the Remote Sensing of Environment journal. Reference: Xinyi Shen, Emmanouil N. Anagnostou, George H. Allen, G. Robert Brakenridge, Albert J. Kettner, "Near-real-time non-obstructed flood inundation mapping using synthetic aperture radar", Remote Sensing of Environment, February 2019, DOI: 10.1016/j.rse.2018.11.008 Source: University of Connecticut