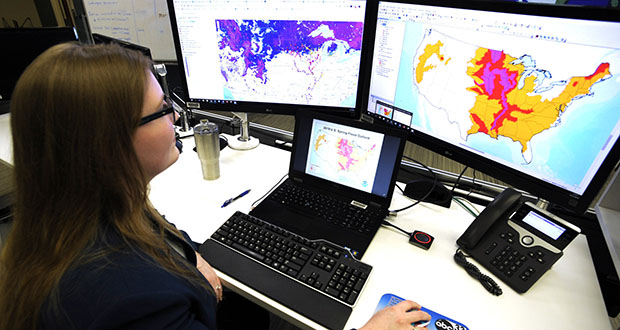 New technology deployed to fight floods MEMPHIS, Tenn. — An arsenal of new technology is being put to the test fighting floods this year as rivers inundate towns and farm fields across the central United States. Drones, supercomputers and sonar that scans deep under water are helping to maintain flood control projects and predict just where rivers will roar out of their banks. Together, these tools are putting detailed information to use in real time, enabling emergency managers and people at risk to make decisions that can save lives and property, said Kristie Franz, associate professor of geological and atmospheric sciences at Iowa State University. The cost of this technology is coming down even as disaster recovery becomes more expensive, so “anything we can do to reduce the costs of these floods and natural hazards is worth it,” she said. “Of course, loss of life, which you can’t put a dollar amount on, is certainly worth that as well.” U.S. scientists said in their spring weather outlook that 13 million people are at risk of major inundation, with more than 200 river gauges this week showing some level of flooding in the Mississippi River basin, which drains the vast middle of the United States. Major flooding continues in places from the Red River in North Dakota to near the mouth of the Mississippi in Louisiana, a map from the National Weather Service shows. “There are over 200 million people that are under some elevated threat risk,” said Ed Clark, director of the National Water Center in Tuscaloosa, Alabama, a flood forecasting hub. Much of the technology, such as the National Water Model, didn’t exist until recently. Fueled by supercomputers in Virginia and Florida, it came online about three years ago and expanded streamflow data by 700-fold, assembling data from 5 million river miles of rivers and streams nationwide, including many smaller ones in remote areas. “Our models simulate exactly what happens when the rain falls on the Earth and whether it runs off or infiltrates,” Clark said. “And so the current conditions, whether that be snow pack or the soil moisture in the snow pack, well that’s something we can measure and monitor and know.” SOURCE TO FULL ARTICLE ABOUT NEW TECHNOLOGY TO FIGHT FLOODS