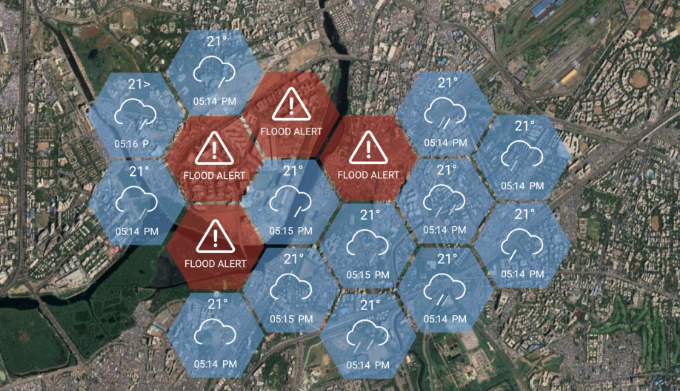 Floods are the most destructive weather event known to man. They cost billions each year in damages, countless hours in repair and disrupted lives and hundreds of human lives. One of the reasons that floods are so destructive is their wild unpredictability, which is only growing with climate change. ClimaCell is here to change the game. With a brand new suite of flooding prediction tools, you can stem the flood and outsmart the weather. Since the beginning of time, floods have been harbingers of destruction. To this day, they are the deadliest weather event we face.  In the last 30 years, more than 535,000 people lost their lives to flood events.During 2018 alone, floods killed more than 10,000 people around the world. Fatalities, injuries, and destruction due to floods are even more prevalent in underdeveloped countries that often lack infrastructure and quality, reliable data. Climate change is causing more and more extreme climatic events that cause floods. These events have become increasingly common and decreasingly predictable across the globe. This exacerbates the issues in developing countries that are underserved with weather data, and the lack of time to prepare for and respond to weather emergencies makes a mass casualty incident 1,000% more likely. Beyond the fatalities, families can lose an entire year’s worth of income in less than an hour if a flash flood strikes their farm, which has a high likelihood in countries like India, where weather data is poor at best, and often nonexistent. Dr. Amir Givati, former Head of the Surface Water and Hydrometeorology Department in the Israeli Hydrological Service  has been working with flood forecasting over the last 15 years. In addition to greatly contributing to the flooding knowledge base, he’s saved lives through his unique hydrological models by creating timely alerts about flooding hazards. In his own words, “In a volatile climate, floods and drought are two sides of the same coin. Dry and wet spells are subject to the same physics. Better data can make the difference between adverse impacts and resilience”. On his quest to make a large-scale social impact across the globe, Amir joined ClimaCell, helping create an entire suite of tools to forecast floods well in advance of the actual event to help those who need it most. ClimaCell taps into multiple connected network layers to extract weather data and maps all the weather in the world from millions of unexpected sources, creating proprietary Micro-weather data never seen before. This data is combined with a suite of flood specific hydrological models that can accurately predict when floods will strike, giving timely alerts which give countries time to prepare and save lives. ClimaCell’s Global Urban Flooding Forecast provides forecasting predictions for flood-sensitive megacities, covering 500 million lives in Asia, Africa, South America, and Europe. It uses its by-the-minute precipitation forecasting and can send alerts 24 hours before a possible flood event. We’ve always believed that we can use our data to help create a better world, and that’s just what we aim to do here. We’re turning big weather data into the great equalizer by using everyday technologies to create virtual weather sensors. By mapping the world’s data, we’re offering hope where before there was nothing but a chance. With more advanced flood modeling, new global insights will stem the flood, and make a world of difference. Source: ClimaCell