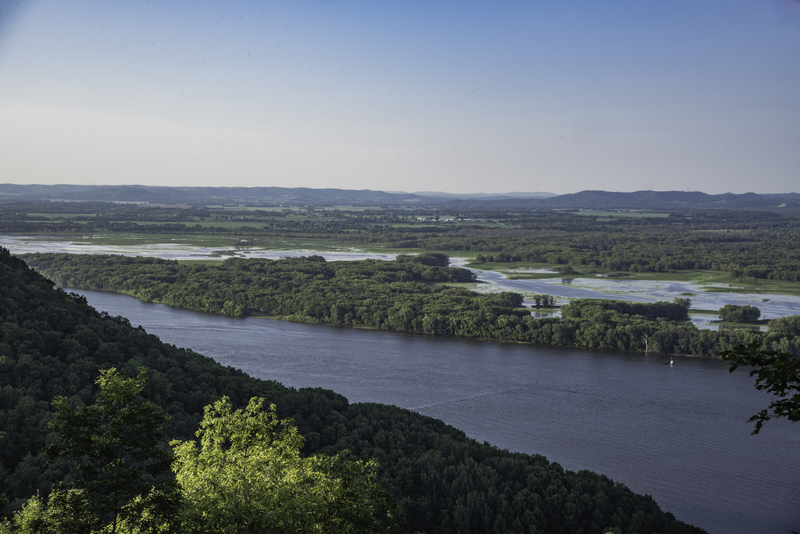 A new study has revealed for the first time the last 500-year flood history of the Mississippi River. It shows a dramatic rise in the size and frequency of extreme floods in the past century—mostly due to projects to straighten, channelize, and bound the river with artificial levees. The new research, led by scientists at Woods Hole Oceanographic Institution (WHOI), also uncovered a clear pattern over the centuries linking flooding on the Mississippi with natural fluctuations of Pacific and Atlantic Ocean water temperatures. This newly recovered long-term record provides a historical context that spotlights how more recent river engineering has intensified flooding to unprecedented levels. The research team collected cores of bottom sediments from three oxbow lakes to trace the history of major floods along the lower Mississippi River. Lakes such as this one (called False River) are former meanders that have become separated from the main river channel. During large floods, river water flows into them again, carrying suspended sediments that settle to the lake bottom—a “signature” of flooding that researchers can identify. (Google Earth, 2018) “The floods that we've had over the last century are bigger than anything we've seen in the last 500 years,” said Sam Muñoz, a former postdoctoral scholar at WHOI and the lead author of the study, published April 5, 2018, in the journal Nature. The research shows that in the past 150 years, the magnitude of the 100-year flood—a flood that has a 1 percent chance of occurring in any given year—has increased by about 20 percent. The research team found that about three-quarters of that elevated flood hazard can be attributed to human modifications of the river and its basin. “There’s been a longstanding question about the extent to which all the changes we have made to the Mississippi River—one of the most engineered rivers in the world—have altered the probability of really large floods,” said Muñoz, now an assistant professor at Northeastern University. To answer that question, the scientists used a technique that WHOI paleoclimatologist Jeff Donnelly pioneered in the coastal ocean to track the history of hurricanes: extracting long cores of bottom sediment from lakes and marshes.  “It’s sort of the equivalent of sticking a straw in a milkshake, putting your thumb over the top, and pulling it out,” said Donnelly, a co-lead on the study. In this case, the “straw” was a 30-foot-long aluminum tube deployed from a small pontoon boat, and the “milkshake” was the mud, sand, and silt at the bottom of three oxbow lakes adjacent to the Mississippi River. During large floods, faster moving water from the river channel stirs up larger-grained sediments and flows into the usually disconnected lakes, carrying sediments and debris along with it. The material from the river is caught in the lakes and eventually sinks. It forms a layer on the bottom that is subsequently buried over time. The layers are telltale clues of past floods. The deeper the cores, the further back in time the scientists can reach. Read full article: WHOI