10 years on: How I helped to tackle city flood 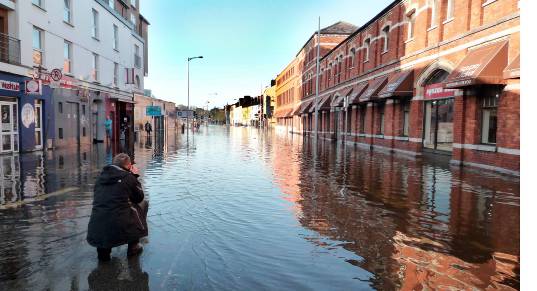 Flooding Washington Street / Western Road Cork . November 2009. Picture: Pat Good. THE Lee Road Water Treatment Plant is a 365-day/24-hour operation producing nearly 10 million gallons of water per day for the city. Water has been produced on the site since the late 1700s and water filtration was installed in 1879. The floods, which affected Cork city on November 19, 2009, had a major impact on the operation of the Water Treatment Plant, leaving it out of operation for several days. Late on that Thursday night and into the morning, severe flooding occurred in Cork city and had a significant effect on the operation of the Lee Road plant. After midnight on the Friday, access was impossible and mobility was severely restricted. Both myself and colleague, Pat Kerrigan, were provided with transport to the plant at 3am that day by the Defence Forces. We had to assemble at the junction of Dennehy’s Cross/Wilton Road, and boarded an Army truck for transport to the plant. As flood waters were rising in the waterworks, it was important that the High Tension Switch-gear would be switched off. A journey which would normally take five minutes lasted well over 30. The most severe flooding was at the junction of Orchard Road/Victoria Road. With great assurance, the Army personnel negotiated the flooding and we reached the plant at 3.45am. Having checked with the Plant Engineer, Brendan Goggin, who remained there throughout the night, we isolated all power to it at 4am. This operation was carried out purely for safety reasons, and so that no damage would be done to the vital switch-gear. Looking at the Pump-house machinery, now silent in the quiet of that night, one would be forgiven for having a feeling of despair. The unforgettable sound of these massive pumps, rotating machinery providing water for the people of Cork, were now static and at the mercy of this massive and uncontrollable flood. Early on Friday, logistics had to be put in place to get an overview of the situation. The city was waking up to a flood of unparalleled proportions. Our immediate task was to get to the Lee Road, to assess the damage. In the company of Denis Crowley, who managed to get his truck as far as Wellington Bridge, a feat in itself, we were finally brought through 4ft of water, with the aid of a JCB. The sight at the waterworks will live long in the memory. The flood waters had reached an unprecedented level. Our first task was to acquire pumping machinery, which would enable us to clear the entire plant of the immense volumes of surface water. This was done and by 2pm that Friday we were pumping flood waters from the plant. This continued throughout Friday, and at 6pm, contractors who would be in a position to repair the pumping equipment were on site. We were hopeful that having isolated all power to the plant during the night, long term damage to equipment may have been avoided. Pumping of flood waters continued all night with the aid of temporary external floodlighting. We met in the plant at 8am on Saturday. The main Pumping Station was still under floodwater and no pumps were yet visible. A sub-committee of John O’Sullivan (Senior Engineer, RIP), Brendan Goggin (Plant Engineer), Maurice O’Sullivan (Water Distribution), Pat Kerrigan and myself (Electrical Section) was quickly set up to quantify the damage where possible and set in place a potential time-line to affect repairs. These were quantified under two categories: On Site and Off Site Repairs. Large quantities of forced blow heaters were used throughout the night where possible. Contractors were at the plant at 2pm on Saturday removing all the main pumps, which then were brought to Special Heating Chambers for testing. Considerable damage had been done to the High Tension Room, and in particular to the Laurence Scott Control equipment. Indeed, it is ironic that the same Laurence Scott Company had famously manufactured electrical equipment for the ill-fated Titanic and one of their pumps was still in position when the Titanic was discovered in 1985. Our site meeting on Sunday morning gave us a somewhat clearer indication as to the overall position. The contractor for the High Tension Work had arrived the previous night, having travelled from Dublin, and gave an update on the damage. We identified the following Wednesday, November 25, as a potential time-line to pump to the Shanakiel Reservoirs. This may have been premature as Brendan Goggin had serious reservations about the condition of the Pure Water Basin. This contained all treated and filtered water prior to delivery to the reservoirs. A vital piece of infrastructure, it had been flooded for over two days with untreated river water. Cleansing of it commenced on Tuesday and continued for two days. After 57 hours without power, we eventually switched on Transformer No. 1 on Sunday, November 22 at 1pm. Our site meeting on Monday revealed further uncertainty. One of our major High Voltage Switches would have to be sent to England for repair. This was done without delay. Some of the original motors, removed on Saturday for testing and repair, were now returning to the plant. These were put into position by former Council Fitter, Brendan Heffernan, and electrician Kevin O Hanlon. Slowly, we appeared to be returning to some normality, even though the plant was now in its fourth day of shut-down. After testing, pumps were returning to the plant and on November 25 at 5pm we were pumping treated water to the Shanakiel Reservoir. There was a great feeling all round as this was the first quantity of water to leave the plant since November 19. A new High Voltage Switch arrived from England and by 1pm on November 28, the plant was fully up and running, pumping a treated supply of water to all Reservoirs for distribution throughout the city. SOURCE By John O'Sullivan EchoLive